The Walk of Carlos III

Located between Genoves Park and the Alameda de Apodaca, uniting both

Along this walk we can find balustrades, lampposts and sentry boxes (escaragüitas).

Layout of the walk 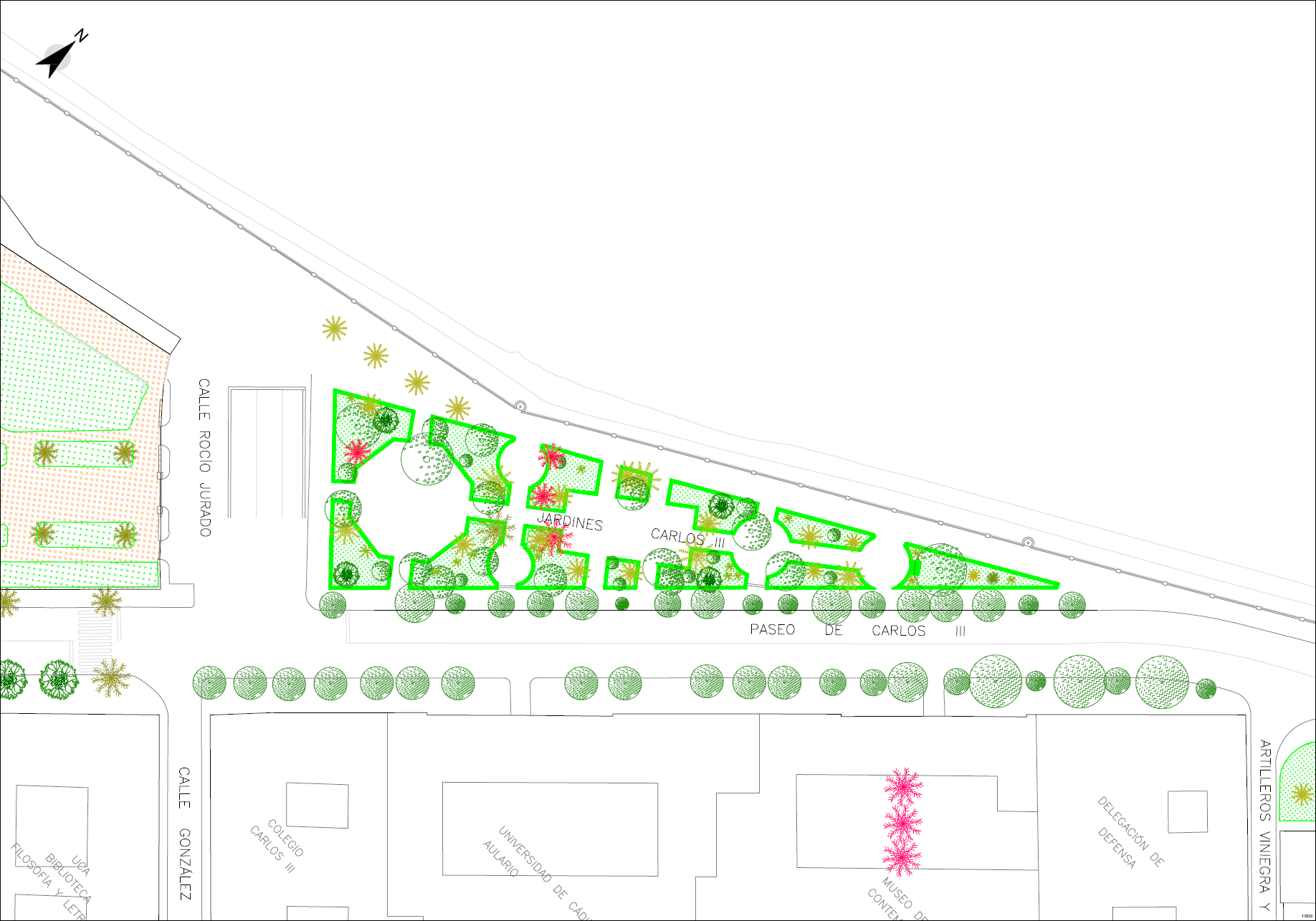 The current Walk dates from 1927 and its origin corresponds to the progressive occupation of the military security space of the walled perimeter of Cadiz. The current architecture is the work of the architect Juan Talavera y Heredia, the same architect that was in charge of the remodelling of the Gardens of Alameda Apodaca and Marques de Comillas. Its design follows the line created by the Alameda, executed in the same regionalist style of the Alameda. In fact, the sequence of the gardens is repeated, with walks on the walls and a succession of roundabouts and zones linked by walkways covered, on some occasions, by pergolas, as well as the type of furniture used, based on the Triana ceramics with wrought iron elements.

It was declared by the Junta de Andalucía as an Asset of Cultural Interest (BOJA 19/3/2004) and is included in the General Catalogue of the Historical Heritage of Andalusia.

Its current shape is triangular, with its base just in front of the park entrance. It consists of a first open space of polygonal floor with a small central fountain and benches on the sides of the polygon. From this space, a path covered by pergola opens, with lateral exits to small circular roundabouts, which communicate with the second open space of the garden, this square floor surrounded by hedges, with benches on the corners and double lateral exits.

In the interior of the garden a central axis is clearly distinguished, with different squares, four round ones, a rectangular one and another wider, octagonal one with a fountain in its centre.

Layout of the walk

The outer perimeter that faces the road is bordered by a walk of London Plane trees (Platanus hybrid).

Each flowerbed is bordered by a permeable hedge of Pittosporum (Pitosporum tobira).

Among the outstanding tree species that can be found in this space are:

As well as having different types of Palm Trees:

The pergolas are covered by climbing species such as Bougainvillea glabra (sometimes referred to as paper flower), Cape Honeysuckle, Trumpet Vines and Bignonias.

The most remarkable botanical species of the Paseo de Carlos III are, among others:

Login to Zonas Verdes, Parques y Jardines de Cádiz
Reset Password
Enter the username or e-mail you used in your profile. A password reset link will be sent to you by email.